As a Texas medical doctor and Stryker Rejuvenate Hips metallosis and injury replacement attorney I am providing this Stryker litigation update. 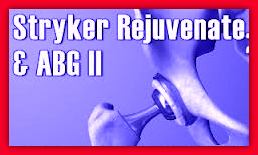 All New Jersey state court lawsuits over the recalled Stryker Rejuvenate modular hip system, maybe be centralized before one judge for coordinated handling. A Multicounty Litigation application has been made to designate all Stryker hip replacement lawsuits involving the Rejuvenate and ABG II modular hip stems. The Multicounty Litigation designation, would consolidate all of the cases before one judge.

In July 2012, a recall was issued for the Stryker Rejuvenate and ABG II neck stems, because of the risk of fretting or corrosion at the modular-neck junction, which may increase the risk of pain, swelling, metallosis and ultimately the failure of the artificial hip replacement.

There are currently at least ten personal injury lawsuits in New Jersey involving individuals who received the recalled components. According to experts, the number of cases are expected to continue to grow over the coming years, as more and more metal hips fail.

What is the Stryker Rejuvenate Modular Hip System?

The Stryker Rejuvenate Modular Hip System was introduced in February 2009. The hip replacements were designed to last 15 to 20 years, under normal wear and tear conditions. Stryker, the metal hip manufacturer, removed the modular implant system from the market three years later after reports of premature failure, requiring revision surgery to replace the artificial hip.

According to the lawsuits, the allegedly defected Stryker Rejuvenate modular neck-stem design causes metal particles to be released into the body as the component units grind against each other, leading to metallosis, local and systemic inflammatory reactions and loosening of the components. Metallosis causes necrosis of surrounding hip and muscle tissue, and bone cell death known as osteolysis.

Read more here and visit our website for further information.