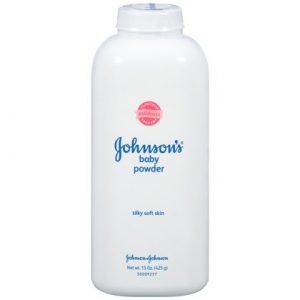 The link between ovarian cancer and talcum powder was originally discovered in 1971 in a study that revealed talc particles in the ovarian tissue of cancer patients.

This was the first instance in which medical professionals realized women were at risk when using the powder on their genitals, sanitary pads, diaphragms, and in condoms. Talc particles easily made their way into the vagina and were able to travel deeper into the reproductive organs. One sample study demonstrated the ability of carbon particles to travel through the vagina and into the fallopian tubes in as little as 30 minutes, leading researchers to believe the same was possible with talc particles.

Despite the original findings and subsequent studies that have supported the original research, talc mining companies and Johnson & Johnson continue to argue against the connection citing insufficient evidence. The company has also managed to keep its product on the market without a warning for nearly half a century after the original discovery.

Following the first settlement in 2013, attorneys have begun reviewing claims of women who have developed ovarian cancer after using talcum powder at some point in their lives. It stands to reason if one jury found that talcum contained in powders contributed to one woman’s ovarian cancer, it could be the case for many additional women.

The plaintiff in this first case was Deane Berg, a woman in her 50s who was diagnosed with ovarian cancer in 2006. She reported more than 30 years of talcum powder use, including the Johnson & Johnson product Shower-to-Shower body powder, as part of her personal hygiene routine. The South Dakota jury found that Johnson & Johnson failed to warn consumers of the link between the use of their talc powders for feminine hygiene and an increased risk of ovarian cancer.

One of the leading experts in talcum-related cancer research, Dr. Daniel Cramer, testified on behalf of the plaintiff and suggested talc has been the cause of a number of ovarian cancers throughout the years. During the course of the trial, a Johnson & Johnson attorney admitted the company was aware of the link between talcum powder and cancer, but viewed the risk as insignificant and neglected to warn consumers of the potential danger on the product’s label.

As a result of the successful lawsuit, many women are hopeful they could also receive the same recognition and compensation. At least one state attorney general’s office is investigating Johnson & Johnson’s marketing and sale of talcum powder products for feminine hygiene and the company faces additional pending claims filed by women who developed ovarian cancer following the ongoing use of its talcum powders as part of their hygiene routine.

If you or a loved one suffered from ovarian cancer after using the product, contact our office immediately. You may be entitled to compensation.