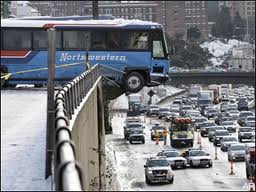 A bus crash that led to the death of eight people near Laredo, Texas is being investigated by the National Transportation Safety Board (NTSB). There is a chance that a casino named Eagle Pass might be held liable for the incident.

The bus was transporting 50 passengers to the casino when the driver lost control and the bus overturned. The accident resembles a similar incident in which Choctaw Nation casino was held liable after a charter bus transporting people to the casino from a nearby city crashed. Choctaw Nation was force to pay $11 million after a jury found them liable for the accident.

“Evidence showed how casinos rely on these buses to bring in business, and the Choctaw Nation was aggressive in its contract negotiations to get the very cheapest price from these bus companies while having little vigilance for safety,” an attorney familiar with the case said. “Trial testimony revealed that a charter bus carrying 50 passengers was guaranteed to generate $15k to $50k for the casino.”

The bus, which departed Saturday morning from the Rio Grande Valley, was traveling north on U.S. 83 some 46 miles north of Laredo when the driver struck a curb causing the bus to skid off the road and rollover, according to a witnesses.

“OGA Charters was guilty of negligence in that [bus company] placed that bus on the road knowing that conditions existed on the bus which made it dangerous for passengers,” according to a lawsuit filed in the Hidalgo County District Court. “The company driver, in the course and scope of his employment was negligent in his operation of the bus, namely failing to control the speed of the bus; failing to maintain the bus in a safe direction of travel and failing to take appropriate action to control the bus and avoid a rollover in wet and rainy conditions.”

The NTSB will investigate the bus’s black box to determine if it contains data that can provide details on what happened. According to a person familiar with the investigation, it could take up to 14 months for the investigation to be complete.

Some people believe that the casino, not just the charter company, should be held liable for the accident.

“It’s not just about the bus company. There could be other potential parties that could be responsible,” attorney Jody R. Mask said. “For instance, was the casino involved in scheduling these charters? Was there a contract between the casino and the charter company?”

An attorney for the casino told the Associated Press that the bus was not chartered by the casino and they were still looking into what business arrangements, if any, the casino may have with the bus company.