The Environmental Protection Agency (EPA) is failing to stem the pollution washing into waterways from cities and suburbs, the National Academy of Sciences reported this week.

According to the report’s authors, there needs to be “radical changes” in the way the federal government regulates stormwater runoff so that all waters are clean enough for fishing and swimming.

Stormwater runoff is the toxic brew of oil, fertilizers and trash picked up by rain and snowmelt as the water flows over parking lots, roofs and subdivisions. 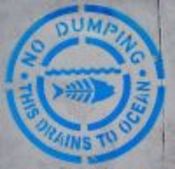 The report said responsibility for managing stormwater must shift from developers to local governments, and permits should be issued on the boundaries of a watershed, rather than state borders.

While urban areas cover only 3 percent of the U.S., it is estimated that their runoff is the primary source of pollution in 13 percent of rivers, 18 percent of lakes and 32 percent of estuaries.

Congress required the EPA in 1987 to start issuing permits under the Clean Water Act to industrial and construction sites. But lawmakers changed the focus on water pollution, from industrial discharges and sewage pipes to runoff, a problem that is much larger and harder to pinpoint.

The law is designed to target specific contaminants, when the problem with stormwater often is one of volume. A surge of water after a storm can cause streams to erode and fill waterways with sediment.

Medical Analysis: “Water water everywhere yet non to drink.” Water is the more precious commodity out there. Got to take care of it. Read about Texas water.