Thoratec HeartMate II Left Ventrical Assist Device (LVAD) or a Left Ventrical Assist System (LVAS), is a mechanical heart pump that is used to continuously pump blood through the heart. It is a critical bridge device for patients with advanced heart failure who are awaiting a heart transplant. 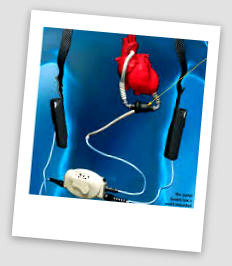 Every year, about 4,000 people are implanted with an LVAD, and about 75% receive the HeartMate II. Unfortunately it can form deadly blood clots, according to a recent medical report.

The implanted device caused 72 blood clots in 66 patients at three institutions, where 895 devices were implanted from 2004 through 2013, according to a study in the New England Journal of Medicine. The report pooled data from the Cleveland Clinic in Ohio, Washington University Barnes-Jewish Hospital in St. Louis, and Duke Medical University Center.

Thoratec’s HeartMate II takes over for the failing heart, and research has shown it can extend patients’ lives, gaining them time to find a donor organ for a transplant. While the exact cause of the increased rate of blood clots “remains unknown,” according to the report, its authors said recommendations for use of the pump “should account for this updated risk profile.”

The device was recalled in April 2012, after the California-based Thoratec found that a component of the implanted device is sometimes attached improperly. The company changed information provided to doctors to ensure that the faulty component is fully connected to the device.

FDA notified health care professionals of a Class 1 Recall due to detachment of the bend relief from its intended position around the proximal outflow graft may allow the graft to kink or deform, resulting in reduction of blood flow from the HeartMate II LVAS pump, pump/graft thrombosis, or perforation of the outflow graft.  Additionally, the metal end of the bend relief may be sharp and cause erosion and cutting of the outflow graft.  This product may cause serious adverse health consequences, including death.  Model numbers affected: 103393, 103695, 104692, 104911, 104912.

The blood clots were treated with drug therapy, heart transplant or implanting a new device. Among 11 patients who got heart transplant, one died a month after the surgery. Pumps were replaced in another 21 patients, with a rate of death similar to those who didn’t have the blood clot. Among the 40 patients who didn’t undergo either transplant or device replacement, about half died 6 months after the clot was diagnosed.

Heart failure, a progressive disease, strikes 1 in 5 Americans older than 40. It occurs when a damaged organ can’t supply enough oxygen-rich blood to keep other organs, such as the lungs, working. There are few treatments, and no cure.