As a Texas Personal Injury attorney and medical doctor, we are providing this timely update regarding table saw injuries. 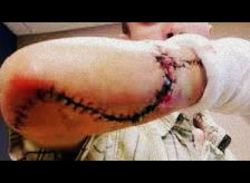 Table saws are one of the most dangerous tools to work with. According to the Consumer Product Safety Commission, there are nearly 60,000 blade injuries every year. Nearly 4000 of these injuries involved amputation.

Amputations and bone fracture injuries happen to about one in 10 table saw users.

Injuries to the head, neck, eyes, legs, upper arms, and chest also occur, even when the operator is wearing protective clothing.

According to table saw experts, each of these injuries is entirely preventable. Technology known as “SawStop” has existed for more than 10 years that immediately stops a spinning saw blade once it comes into contact with human skin.

A consumer who comes into contact with a spinning table saw blade equipped with SawStop will suffer a slight nick or cut, as opposed to a serious injury or amputation.

Large tool manufacturering companies have refused to incorporate the SawStop technology into their saws, claiming it is too expensive.

Recently, a federal appeals court upheld a $1.5 million verdict for Carlos Osorio, a Massachusetts man injured in a construction site accident involving a Ryobi table saw. The accident occurred when Osorio’s hand slipped while cutting along the length of a piece of hardwood flooring, causing his left hand to slide into the saw’s blade and leading to a severe injury to his hand.

The Consumer Product Safety Commission has taken recent action that may force saw companies to adopt the SawStop technology. On October 5, 2011, the CPSC unanimously approved a recommendation to begin the process of creating new performance standards for table saws that would require the reduction or elimination of blade contact injuries.

Manufacturers of Table Saws include:

According to the CPSC, there are about 67,300 table saw injuries annually, costing about $2.36 billion per year. About 4,000 people a year have a finger amputated. That does not include injuries from portable circular saws.

Power tool manufacturers say that most of the safety measures would raise the price of saws significantly and in some cases may quadruple the cost of the tools. They also say that the safety features already standard on most table saws should provide adequate protection.

Read more here and visit my website for further information