As a Texas medical doctor and Novartis Zometa Osteonecrosis/Jaw Death personal injury and product liability attorney I am providing this Zometa litigation update. 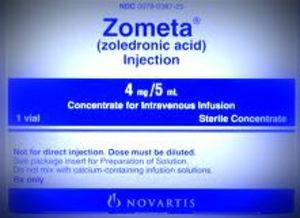 The verdict, is the second-largest among similar cases over Zometa. It is the fourth win for plaintiffs out of eight Zometa-related jawbone cases that have gone to trial. According to the plaintiff’s attorney, the jury in the Davids case awarded $450,000 in compensatory damages and $10 million in punitive damages.

Davids claimed that she developed side effects of osteonecrosis (ONJ), or bone death, in her jaw after taking Zometa.

During the trial, the attorneys for Davids showed the jurors a May 2003 e-mail in which a Novartis marketing employee described a proposed report linking Zometa to jawbone complications as “quite damaging.”
The largest verdict in Zometa-related jawbone osteonecrosis cases was $12.8 million, awarded to a North Carolina woman’s family in November 2010.

Zometa (zoledronic acid) is a medication used to reduce bone complications associated with multiple myeloma and bone metastases from cancers. Zometa is a bisphosphonate, which have been associated with an increased risk of ONJ. ONJ is a severe and damaging painful condition that causes decay or death of the jaw bone, often resulting in the need for surgery to remove portions of the jaw.

Zoledronic acid (Zometa) is used to treat high levels of calcium in the blood that may be caused by certain types of cancer. Zoledronic acid (Zometa) is also used along with cancer chemotherapy to treat bone damage caused by multiple myeloma [cancer that begins in the plasma cells (white blood cells that produce substances needed to fight infection)] or by cancer that began in another part of the body but has spread to the bones.

Zoledronic acid (Zometa) is not cancer chemotherapy, and it will not slow or stop the spread of cancer. However, it can be used to treat bone disease in patients who have cancer. It works by slowing bone breakdown, increasing bone density (thickness), and decreasing the amount of calcium released from the bones into the blood.

Federal complaints over both drugs have been consolidated together as part of a multidistrict litigation (MDL) in U.S. District Court for the District of Nashville for pretrial proceedings.

There are Fosamax jaw necrosis lawsuits that are pending against Merck & Co. over their oral bisphosphonate medication. Fosamax is used to treat osteoporosis and reduce the risk of bone fractures, long term use of the medication has also been linked to an increased risk of jaw osteonecrosis.