Metal on metal hip implants have been around for the past two decades but they have been plagued with early failure, metal poisoning, tissue destruction and finally the need for painful replacement surgery. 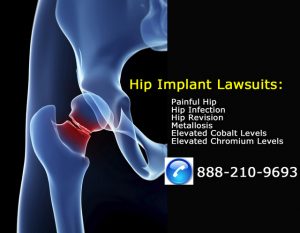 Metal on metal hip implants have a high failure rate including those manufactured by Biomet, DePuy, Encore, Smith & Nephew, Stryker, Wright and Zimmer.

Now Howmedica Osteonics and its subsidiary Stryker have the dubious honor of being the latest metal on metal hip manufacturer to join the metal hip failure rogues gallery.

This is not the first recall ride at the rodeo for Stryker, they announced a world wide recall over their metal on metal ABG II and Rejuvenate hip models in 2012.

Stryker Orthopedics makes the LFit Anatomic CoCr (cobalt and chromium) V40 femoral head. It is an interchangeable “ball” component for total hip replacements that can be attached to a variety of hip stems, including the Accolade TMZF, Accolade 2, Meridian, and Citation.

On September 29, 2016, Australian health officials issued a Hazard Alert for seven sizes of the LFit V40. The problem was identified in four products, while three similar products were included as a precaution.

Folks pursuing Stryker hip replacement lawsuits for personal injury and product liability injuries from LFIT Anatomic CoCr V40 femoral heads have filed to have all federal claims centralized in a single U.S. District Court for the purposes of coordinated pretrial proceedings. This is known as multidistrict litigation or MDL.

There are at least six Stryker hip lawsuits involving LFIT V40 components pending in federal courts around the U.S.

According to experts, the litigation could include thousands of similar injury claims, noting that the allegedly defective femoral heads were used in at least six of Stryker’s modular hip replacement devices.

It is estimated that more than 100,000 LFIT V40 components may have been implanted in patients.

Earlier this year, Patton Witt, from Alaska filed a defective product liability claim against Howmedica Osteonics and its subsidiary Stryker.

According to Witt, he was implanted with an LFIT V40 and an Accolade TMZF femoral stem in March 2008. The implant developed “extensive corrosion” and the taper-lock wore out, which required revision surgery. He suffered from elevated levels of cobalt in his bloodstream (metallosis) and a large pseudo-tumor or soft-tissue mass in his hip.

Stryker “No warning letters to patients impacted by the recall”

According to the Stryker hip lawsuits, the company did not ask for the affected femoral heads to be returned and did not tell doctors to notify their affected patients of the potential defect in the implanted hip.

The complaints further claim that Stryker knew for years that the LFIT V40 femoral heads were defective and dangerous, but chose to ignore the risk of using the components.

If you think you may have a Stryker V40 Head or a Stryker Accolade TMZF stem and are experiencing pain potentially caused by metal corrosion or have suffered a spontaneous dissociation necessitating full revision and emergency care, please call us.