Germany based Boehringer Ingelheim, the manufacturer of the anticoagulant medication Pradaxa has agreed to pay $650 million to settle Pradaxa injury lawsuits. There are 4,000 lawsuits on file by folks who allege that the company failed to warn about the risk of severe and deadly bleeding problems with the anticoagulant drug use. 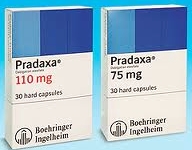 Pradaxa, has been linked to more than 500 patient deaths. The settlement comes about week after the drugmaker  said a new analysis of a company-funded study used to win approval of the Pradaxa found 22 serious bleeding events that weren’t included in the original report.

Pradaxa (dabigatran) was approved by the FDA in October 2010 for the prevention of strokes for patients with atrial fibrillation. Atrial fibrillation is one of the most common heart rhythm abnormality. Pradaxa and other similar drugs are a new class of blood thinners designed to replace warfarin, which had been around for some 60 years.

Unfortunately Pradaxa use lead to an inordinate number of adverse event complaints by doctors and patients. Warfarin anticoagulant effects can be reversed using vitamin K, Pradaxa had no reversal agent. There have been thousands of reports of injuries and hundreds of deaths associated with Pradaxa use.

About 4,000 Pradaxa product liability lawsuits have been filed in both state and federal courts. According to documents made public during litigation, Boehringer officials didn’t disclose to the FDA a data analysis that indicated the blood-thinning drug may have caused more fatal bleeding after it was cleared for sale than in a study used to win approval.

Federally, more than 2,350 of the Pradaxa cases have been consolidated as part of an MDL, or multidistrict litigation, which is centralized before U.S. District Judge David R. Herndon in the Southern District of Illinois.

The complaints allege that Boehringer Ingelheim failed to provide adequate warnings about the risk of serious and deadly Pradaxa bleeding and the lack of an effective antidote. Without an effective antidote, there have been instances of unstoppable bleeding, the doctors had to stand by helplessly while the patients bled to death.

FDA officials said they received reports of 542 deaths and 3,781 side-effect incidents tied to the drug in 2011. According to the FDA, Pradaxa was found to increase the risk of certain bleeding events when compared to warfarin. Pradaxa decreased the risk of stroke and brain bleeds, but the FDA noted that Pradaxa increased the risk of gastrointestinal bleeding.