As a Multaq Dangerous Drug attorney and Texas medical doctor, I am providing this information on a drug company sponsored trial of its drug Multaq, which was halted because of increased cardiovascular side effects and injuries. 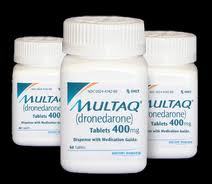 According to the primary medical investigator, “. . . there was a significant increase in major cardiovascular events, and in our study that was defined as a composite of stroke, MI, systemic embolism, or cardiovascular death. . . . These were pretty important events.”

Dronedarone has faced a range of criticisms since its approval in the US in July 2009, including questions about its safety/efficacy tradeoff and the design and execution of the ATHENA study. Just last week, newspapers in France reported that French health authorities had concluded that the efficacy of dronedarone was “insufficient”—an opinion that could lead to the drug being dropped from the country’s drug reimbursement formulary.

Dronedarone, sold by sanofi-aventis, is currently approved to treat atrial flutter and paroxysmal or persistent – but not permanent atrial fibrillation.

The phase 3b trial, called PALLAS, had enrolled 3,148 patients with permanent atrial fibrillation, with 70% showing symptoms for more than two years, according to a company statement. Sanofi did not specify the cardiovascular events seen in the dronedarone-treated patients, or the magnitude of the increase.

In January, sanofi-aventis and the FDA warned that reports of acute liver injury associated with the drug had been received. The statement noted that patients with permanent atrial fibrillation and “vascular risk factors” are at high risk for cardiovascular events.

An earlier trial of dronedarone in patients with relatively severe heart failure, called ANDROMEDA, was halted early when mortality in patients receiving the drug was found to be twice that seen in the control group.

Sanofi-aventis has alerted healthcare professionals to several reports of liver function test abnormalities and hepatocellular injury in patients treated with its atrial fibrillation drug dronedarone (Multaq). The Dear Healthcare Provider letter included two post-marketing case reports of acute liver failure that required transplantation, occurring at four-and-a-half and six months after the start of dronedarone therapy. The patients – both female and about 70 years old – had had normal hepatic serum enzymes before starting the drug.

In the letter, sanofi-aventis instructed healthcare professionals to tell patients to immediately report any symptoms suggestive of hepatic injury. According to the FDA, these include anorexia, nausea, vomiting, fever, malaise, fatigue, right upper quadrant pain, jaundice, dark urine, or itching.

Periodic liver enzyme tests, especially in the first six months of treatment, should also be considered, according to the FDA, although it is unknown whether such a strategy will prevent the development of liver injury.

Dronedarone’s prescribing information will be updated to include the guidance from the Dear Physician letter, and will be distributed after the FDA approves it. The agency confirmed that a warning about potential liver injury will be added to the drug’s label.

According to the FDA, from the drug’s approval in July 2009 through October 2010, about 492,000 prescriptions for dronedarone were dispensed and about 117,000 patients filled prescriptions at U.S. pharmacies.

The drug was approved with a Risk Evaluation and Mitigation Strategy to prevent use in patients with severe heart failure or in those with less severe heart failure who were recently hospitalized for the condition. Such patients had a doubling in the risk of death in a placebo-controlled study.