According to the FDA recent warning, there are serious issues and side effects with the new class of medications used to treat type 2 diabetes. 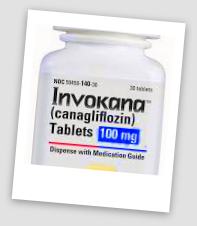 Johnson & Johnson’s Janssen Pharmaceuticals unit manufactures and distributes Invokana (canagliflozin), for patients with type-2 diabetes, to control their blood-sugar levels. The drug has achieved blockbuster status, in that it is set to blow past a billion dollars in sales in 2015.

The FDA approved Invokana in 2013, and Invokana was the first medication in a new class known as sodium-glucose cotransporter-2 (SGLT2) inhibitors. Other members of this class include Farxiga, Invokamet, Glyxambi, Jardiance, and Xigduo XR. AstraZeneca manufactures Farxiga and Xigduo, Jardiance and Glyxambi is made by Lilly and Boehringer Ingelheim. J&J also combines Invokana with metformin and markets it as Invokamet.

Invokana is the most widely used of the class. These medications prevent hyperglycemia (high blood-sugar levels) by allowing the kidneys remove excess blood sugar via the urine.

What is the problem with Invokana?

According to a report from the Institute for Safe Medication Practices (ISMP), Invokana has been linked to hundreds of severe adverse events.  The FDA has received over 457 adverse events for Invokana in its first 12 months on the market, including:

In May 2015, the FDA issued a Safety Communication for all drugs in the SGLT2 inhibitor class, including Invokana, after receiving 20 reports of patients who developed diabetic ketoacidosis.

All of the victims were hospitalized between March 2013 and June 2014. The FDA has continued to receive more reports of this potentially lethal side effect. According to the FDA, “Healthcare professionals should evaluate for the presence of acidosis, including ketoacidosis, in patients experiencing these signs or symptoms; discontinue SGLT2 inhibitors if acidosis is confirmed; and take appropriate measures to correct the acidosis and monitor sugar levels.”

New warning labels will be required for Invokana, Invokamet, Farxiga, Glyxambi, Jardiance, and Xigduo XR, which urge patients to look for signs of the DKA condition and to seek immediate medical attention if symptoms are present.

According to the European Medicines Agency (EMA) warning issued in June 2015, SLGT2 inhibitor diabetes drugs have been associated with 101 cases of diabetic ketoacidosis worldwide.

What is Diabetic Ketoacidosis?

Diabetic ketoacidosis (DKA) is a serious complication of diabetes that occurs when the body produces high levels of blood ketones. DKA develops when the body is unable to produce enough insulin. Insulin plays a key role in helping sugar (glucose) — a major source of energy for the muscles and other tissues — enter the cells.

Without enough insulin, the body begins to break down fat as an alternate fuel source. This process produces a buildup of toxic acids in the bloodstream called ketones, eventually leading to diabetic ketoacidosis if untreated.

What are Diabetic Ketoacidosis Symptoms?

With the serious safety concerns and lack of safety studies of this new class of diabetes drug, a detailed investigation is underway to determine is there is grounds for a defective drug product liability claim with an Invokana lawsuit or Farxiga lawsuit as a result of the drug makers’ failure to adequately research the potential risks and warn about the side effects.