Many hip and knee surgery patients can develop bacterial infections of their implants, leading to painful re-do surgeries, long term antibiotic use and in severe cases amputation because of overwhelming infection. 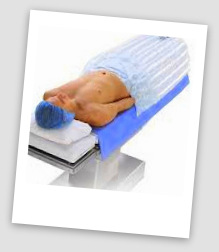 3M and their Arizant Healthcare subsidiary are exposed to personal injury and product liability lawsuits over hip and knee replacement infections may be caused by their Bair Hugger warming blankets.

What is the Bair Hugger warming blanket?

Scott Augustine, an anesthesiologist developed the Bair Hugger device over 20 years ago. And his company was later acquired by 3M. According to the New York Times, there is a long standing feud between Augustine and 3M. Dr. Augustine claims that his invention is a danger to surgical patients receiving implant devices like artificial heart valves and joints. The forced air, he says, can spread bacteria associated with hospital-acquired infections.

Does the Bair Hugger warming blanket cause infections?

During long surgical procedures, the patient’s body temperature tends to drop, from lack of movement and the fact that the operating room is kept cold.

Hypothermia or a lower body temperature is a risk for post operative infections and so the Bair Hugger warming blanket was introduced to keep the patient’s temperature stable during surgery.

Now, according to the allegations in the hip and knee replacement infection lawsuits, the device may cause bacteria and contaminants from the operating room floor to enter the sterile surgical field.

According to experts, there are more than 50,000 Bair Hugger units in use in hospitals across the United States.

The complaints have similar allegations that 3M has known about the infection risk for years, yet failed to make design changes or provide warnings to doctors and hospitals.

The complaints have similar allegations that 3M lied to the FDA about the unit’s effectiveness in filtering out and trapping bacterial contaminants.

Plaintiffs allege that 3M told the FDA that the Bair Hugger meets the High Efficiency Particulate Air (HEPA) standard, when it does not, causing hip and knee replacement patients to face a risk of serious infection during the procedure.

According to a recent lawsuit filed in the U.S. District Court for the District of Minnesota, the Bair Hugger blanket caused Barbara Libby to develop a severe infection after a right hip replacement surgery in November 2010.

The complaint notes that as early as 1997, 3M admitted to the FDA that “air blown intra-operatively across the surgical wound may result in airborne contamination.”

Libby alleges that the Bair Hugger caused bacteria contamination in her surgical wound, resulting in severe infections and seven additional surgeries. Libby has now been left with permanent severe injuries and reduced mobility.

Michael Williams, claimed that he developed an infection following a right knee replacement surgery in February 2013, when a Bair Hugger warming blanket was used.

Williams needed two additional surgeries within less than nine months of the implant, the first to remove the artificial knee and place a temporary antibiotic spacer. Later, he underwent a second procedure to remove the spacer and place another knee implant.