According to a FDA press release this week, testosterone drug makers must change the products’ labels to warn they are approved for only certain disorders, not to help men treat aging symptoms. 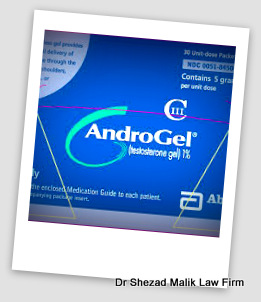 Popular blockbuster drugs, like AbbVie Inc.’s AndroGel and Eli Lilly & Co.’s Axiron, are being restricted and warnings are being required in the labels about a potential risk of heart attack and stroke from using testosterone.

The FDA stated that, “Testosterone is FDA-approved as replacement therapy only for men who have low testosterone levels due to disorders of the testicles, pituitary gland or brain that cause a condition called hypogonadism.”

According to the agency, “However, FDA has become aware that testosterone is being used extensively in attempts to relieve symptoms in men who have low testosterone for no apparent reason other than aging.”

In the federal multidistrict litigation (MDL), testosterone litigation, there are 1,100 cases filed against all manufacturers, and 714 Androgel lawsuits against Abbvie. In June 2014, all federal testosterone lawsuits were centralized as part of a single MDL, for coordinated pretrial proceedings.

U.S. District Judge Matthew Kennelly is presiding over the coordinated pretrial proceedings in the lawsuits out of the Northern District of Illinois

The complaints blame the drug makers for failing to warn men that side effects of testosterone replacement therapy may increase the risk of a heart attack, stroke, pulmonary embolism, and deep vein thrombosis.

There has been a big increase in the filings over the past four months, especially involving AbbVie’s Androgel product. According to many experts, there will be thousands of cases filed by men who suffered serious and catastrophic injuries.

Judge Kennelly has ordered some Androgel cases to go before juries, known as “bellwether” cases, with a series of six trials scheduled between October 2016 and April 2017.

AbbVie currently faces a serious number of Androgel lawsuits, which claim that the drug maker recklessly promoted the medications without adequately warning patients and the doctors.

Similar testosterone drug allegations have also been filed against manufacturers of similar products, including Testim, Axiron, AndroDerm and other “Low T” gels, creams, patches, injections and other treatments.

A separate bellwether track has been established for early test trials involving other testosterone drugs, which are not expected to begin until at least mid-2017. These early trial dates are beneficial in mass tort defective pharmaceutical and product liability medical device cases to help the parties determine how juries may respond to similar evidence and testimony that is presented throughout the litigation.

In November 2013, a study published in the Journal of the American Medical Association (JAMA) linked testosterone to higher rates of heart attacks, strokes, and death among older men with certain pre-existing heart problems.

In January 2014 article in the medical journal PLOSOne, found that low testosterone treatments may double the risk of heart attack for younger men with heart disease and men over the age of 65, regardless of their prior heart conditions.