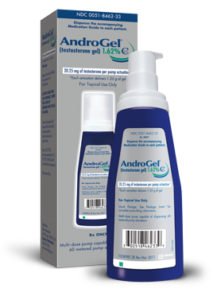 Men who suffer stroke, cardiac arrest and other heart-related issues or other adverse side effects after using AndroGel are beginning to file lawsuits, alleging they were not properly warned of the risks.
AndroGel is synthetic testosterone mixed into a gel with alcohol that is applied to the skin once daily. The testosterone is absorbed into the skin for continuous 24-hour delivery into the body. It is prescribe to men with low testosterone levels to increase their testosterone levels to a normal range.
Recent studies have linked AndroGel to some serious side effects, including cardiovascular problems like strokes and heart attacks. These studies reveal that using testosterone drugs may increase the risks of having a stroke or heart attack.
In 2015, the U.S. Food and Drug Administration (FDA) ordered testosterone drug-makers to add stroke and heart attack risk warnings to medication labels and also warned doctors against over-prescribing the medication. The FDA warned consumers to carefully consider their options before using testosterone drugs.
“The FDA has become aware that testosterone is being used extensively in attempts to relieve symptoms in men who have low testosterone for no apparent reason other than aging,” the agency said. “The benefits and safety of this use have not been established.”
In addition to serious cardiovascular risks, Androgen may also cause other side effects, including:
In 2014, five men sued the makers of AndroGel due to injuries caused by the drug. The men were all between the ages of 50 to 63. Two of the men suffered strokes and three suffered heart attacks. The men filed the lawsuit in the U.S. District Court for the Northern District of Illinois. These cases are now joined by more than 5,000 other lawsuits filed against the makers of AndroGel, Androderm, Testim, Axiron and other testosterone drugs.
The lawsuits against AbbVie, the makers of AndroGel, have been centralized in the U.S. District Court for the Northern District of Illinois. The judge is expected to start hearing a small group of these lawsuits, known as “bellwether trails”, between April and November 2017.
According to the lawsuits, the makers of AndroGel “deceived potential users by relaying positive information through the press, including testimonials from retired professional athletes and statistics suggesting a widespread need for the drugs, while downplaying known adverse and serious health risks.”
If you took AndroGel or any other testosterone drug and suffered a heart attack, stroke or blood clot, you may be entitled to compensation. Our office handles AndroGel lawsuits from across the country.
Contact Us
Free Consultation
214-390-3189
888-210-9693
Connect