Timothy Wilkes from Ohio, filed a testosterone drug personal injury and product liability lawsuit in the U.S. District Court for the Northern District of Ohio. According to Wilkes, the side effects of the popular testosterone replacement medication, AndroGel caused a deep vein thrombosis or a blood clot in his legs that traveled to the lung, causing a pulmonary embolism. 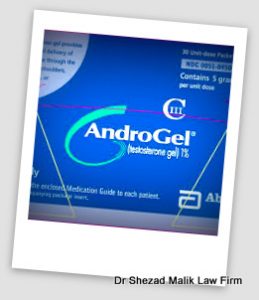 There are almost 3,500 testosterone lawsuits filed in the federal court system, alleging injuries caused by the side effects of testosterone drugs, including AndroGel, Testim, Axiron, Androderm and other variations of gels, patches, pills and injections.

According to the lawsuits, the drug manufacturers touted the testosterone replacement drugs without providing warnings of an increased risk of heart attacks, strokes, pulmonary embolism, deep vein thrombosis or other cardiovascular injury.

Furthermore, the plaintiffs allege that the aggressive advertising on television, magazines and print ads encouraged the men to seek testosterone drugs prescriptions as a lifestyle change to combat the natural effects of aging.

Testosterone medications were promoted in slick “low T” ads as a universal panacea to treat fatigue, weight gain, low sex drive, loss of muscle mass and low energy which many middle age men complain about. The companies that manufactured the testosterone drugs spent  millions of dollars in promoting the non-existent disease and in creating  blockbuster drug sales for the modern day “magical elixir of life.”

According to medical studies, testosterone is only indicated in men who have been diagnosed with hypogonadism, of which there is less than 1 million affected men in the United States.

All complaints filed throughout the federal court system have been centralized for pretrial proceedings before U.S. District Judge Matthew Kennelly in the Northern District of Illinois, as part of an MDL.

The MDL process is common in pharmaceutical and product liability cases, where there are a large number of plaintiffs alleging similar claims. The MDL allows for the streamlining of the lawsuits, standardized discovery, early bellwether trials and a push for settlement negotiations.

According to a November 2013 Journal of the American Medical Association study, older men who began taking testosterone drugs had an increased risk of cardiovascular events, including heart attacks, strokes and death.

In a 2014 medical study in the journal PLoSOne, found that side effects of testosterone drugs may double the risk of heart attacks for men over the age of 65, and as double the risk for younger men with a prior history of heart disease.

In a 2015 study in the journal Pharmacotherapy found that first time testosterone users may be 40% more likely to have a heart attack when compared to men who did not use the drugs.