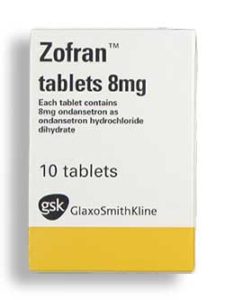 Several lawsuits filed against the makers of Zofran, GalxoSmithKline, suggest that Zofran may cause birth defects.

The US District Court for Massachusetts has been flooded with nearly 200 lawsuit against the makers of Zofran. The lawsuits, arising from across the United States, were consolidated to the Massachusetts’ court where they will proceed as a multi-district litigation.

In 1991 the Food & Drug Administration (FDA) approved the use of Zofran to treat extreme nausea arising from radiation therapy, chemotherapy, and for some post operative procedures. However, FDA never approved Zofran as a safe drug for pregnant women to use.

In response to allegations of “off-label” promotion of Zofran and colluding with medical professionals to prescribe their products, the U.S. government launched an investigation into the company. In 2012 the drug company settled with the government and was fined $3 billion. The settlement revealed allegations that the company was marketing Zofran to pregnant women suffering from morning sickness and allegations that the company was paying “kick-backs” to physicians to prescribe Zofran for morning sickness.

Women who took Zofran while pregnant have launched lawsuits against the company.

In a recently filed lawsuit, a mother argues that Zofran caused her son to develop a condition known as clubfoot. The lawsuit is still in the early stages of litigation.

Clubfoot is a malformation of the foot in which the foot is turned inward so that the bottom of the foot is sideways. The condition is caused by a congenital defect. The treatment for this birth defect includes leg braces, stretching exercises, casts, manual manipulation of the muscle, and in severe cases, surgery is required. The birth defect does not cause any pain to the baby, however if the birth defect is not corrected, the baby will never be able to walk.

Some of the common birth defects caused by Zofran include:

Other birth defects may be caused by Zofran, however.

Did you take Zofran when you were pregnant and have a child with birth defects? Our office is currently investigating Zofran lawsuit from across the country. We encourage you contact us immediately if you took Zofran while pregnant and your child developed birth defects.