As a Texas Biomet M2A-Magnum hip metallosis injury and replacement attorney I am providing this timely update for folks who have been injured by defective metal-on-metal hip replacement implants. 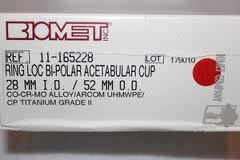 What is the Problem with Biomet M2A Magnum Hip?

The Biomet M2A-Magnum Hip is a metal-on-metal hip replacement system that has been implanted in many patients throughout the United States. It was advertized heavily for being the hip of choice for active and younger patients, and according to experts, the new hip problems after implantation suggest that the metal hip implant may be susceptible to early failure within a few years of surgery.

Most hip implants consist of components made of metal and plastic, but the Biomet Magnum’s claim to fame is that it has three all-metal components, a metal femoral head, metal taper insert and metal acetabulum cup. Unfortunately as these metal components grind against each other, metal flakes may be released into the hip joint, which causes inflammation, loosening, bone loss and destruction and problems associated with metal hip poisoning, known as metallosis. The hips are made out of Cobalt and Chromium and according to the lawsuit allegations, there has been instances of elevated levels of these heavy metals.

Some of the recent studies and advisories regarding metal hip replacements include:

February 2012: British Medical Journal advises that patients should be monitored annually for signs of metallosis for as long as they have a metal hip implant.

March 2012: The Lancet medical journal concludes that metal-on-metal hips should not be used at all due to serious issues with the safety of the implants.

May 9, 2012: Health Canada, the Canadian national health regulatory agency, issues a warning that patients should be aware of metal hip replacement problems and adverse effects.

All filed federal Biomet M2A-Magnum hip replacement lawsuits will be transferred to the Northern District of Indiana for coordinated pretrial proceedings as part of an MDL, or multidistrict litigation. The U.S. Judicial Panel on multidistrict Litigation (JPML) on October 2 issued an order creating the MDL.

Biomet is the manufacturer of the second-most widely used total hip implant system, according to the July 12, 2012, edition of the Chicago Tribune. Johnson & Johnson manufactures the number-one most widely used hip implant, the DePuy Pinnacle. Both J&J and Biomet are defending against product liability lawsuits, which allege that their metal-on-metal hip replacement systems caused severe personal injury. Three other MDLs have been created involving metal-on-metal hip replacement problems, including the DePuy ASR hip, DePuy Pinnacle hip and Wright Conserve hip.

What is a MDL?

The creation of a MDL means that all lawsuits filed in federal court will be consolidated for pre-trial proceedings. But if the parties fail to reach a settlement, the cases will be remanded back to their districts of origin and be resolved through individual trials.