Whenever you’re involved in an accident in which one of the driver was driving a motorcycle, the risk of major injuries significantly increase. There might also be some complicated legal issues involved that require an experienced attorney. 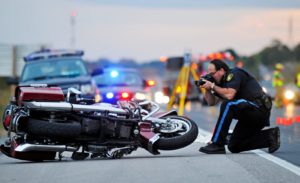 One recent incident that illustrates these points involves a married father of four children who was killed on his way to work. He was driving his motorcycle when he was struck by a sedan that was turning left at an intersection. The driver of the sedan appeared to have no injuries. According to police reports, it is unclear exactly what caused the accident. This could present a serious legal challenge for the family of the man killed in the accident.

In another recent motorcycle accident, a young 18 year old man was paralyzed after his motorcycle was struck by another vehicle on the highway. The 18 year old man was immediately transferred to the nearest hospital. The driver of the other vehicle involved in the accident did not sustain any injuries. In this situation, as in the one above, it was unclear what caused the accident.

As in the examples above, it is not unusual for a person driving a motorcycle to be seriously injured in an accident while the other person sustains little to no injuries. Because of the major injuries typically sustained in motorcycle accidents, it not unusual that “Underinsured Motorist Coverage” becomes an issue.

Underinsured motorist coverage is an insurance policy that comes into play when the other driver is at-fault and his or her insurance policy is not sufficient to cover the cost associated with the injuries. If you were injured in a motorcycle accident and sustained major injuries, carrying underinsured motorist coverage at the time of the accident is very important to ensure your medical costs are completely covered.

Our law firm is armed with both the medical expertise and legal expertise necessary to fully evaluate your motorcycle accident injuries and case. As you can see from the examples above, these cases require an experienced attorney. If you’ve been injured in an accident involving a motorcycle, please don’t hesitate to contact our office.