According to new medical research, metal-on-metal hip replacements may corrode faster than traditional types of artificial hip implants, such as those made from plastic or ceramic. 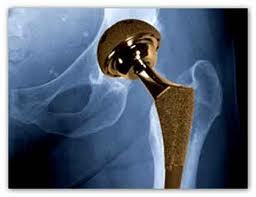 Experts speculate that the corrosion may be linked to an increased risk of local tissue reactions that require revision or removal of the artificial hip implant.

Researchers examined corrosion on the heads of metal-on-metal hip implants, and compared it to the corrosion found on metal-on-polyethylene implants, which have a plastic liner between the metal femoral head and metal acetabular cup. This study is published in the Journal of Arthroplasty,
Study results revealed that metal-on-metal hips showed more corrosion and that rate of corrosion increased over time.

Metal-on-metal hip replacement femoral heads systems are made from cobalt and chromium, which interface within a metal acetabular cup.

As the metal parts of the ball and cup grind against each other, microscopic metal particles are released into the body, which can cause metallosis, or metal blood poisoning.

Researchers found that metal-on-metal implants that had been revised after patients experienced local tissue reactions had higher corrosion scores than those without such tissue problems.

The FDA has scheduled a meeting of its orthopedic devices advisory board to review the safety of metal hip systems for June 27 and 28.

In August 2010, a DePuy ASR metal-on-metal hip recall was issued after data suggested that about one out of eight implants failed within five years. More than 93,000 of the DePuy ASR components were sold worldwide before the recall, with about 40,000 implanted in the United States.

More than 6,000 metal on metal hip replacement victims are pursuing a DePuy ASR hip lawsuit against the manufacturer, Johnson and Johnson.

The plaintiffs are alleging that the implant was not adequately researched and that warnings should have been provided about the risk of metal-on-metal hip poisoning.

Hundreds of individuals are currently pursuing a DePuy Pinnacle lawsuit, after experiencing problems with the older metal-on-metal hip implant, which has also been linked to a high number of failures.

Can thousands of injured hip replacement patients be wrong?