As a Texas Medical Doctor and Dallas dangerous dog attorney, I am writing this update to inform the public about recent dog attacks. 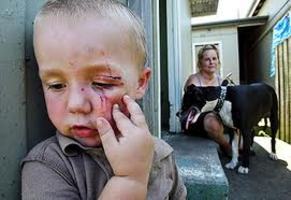 A Washington jury found Pierce County partly responsible for injuries suffered by a woman mauled by a pit bull. The jury awarded $2.2 million to the woman who was attacked by a neighbor’s dog who entered her house through an open door.

The jury determined the owners of the dog were 52 percent responsible. Pierce County received 42 percent of the liability because animal control officials took no action after getting a dozen complaints from the neighborhood. The injured woman, was assigned 1 percent of the blame. She suffered injuries while trying to pull the pit bull off her two Jack Russell terriers.

A 9 tear old girl is recovering after a savage mauling by a neighbor’s pit bull and may have suffered permanent nerve damage. Sabrina Carrasco of Sacramento, was attacked after the pit bull got out of the fenced yard where it was kept.

A 75 year old San Diego woman faced the possible amputation of a second limb after she was attacked by a pair of pit bulls.The woman was jumped by the two dogs in the backyard.

Surgeons at Scripps Mercy Hospital had to remove her badly mauled leg and tried to save her equally mangled arm, but the injuries to the woman’s arm were so severe that it might have to be amputated as well. Read full story here.

A 74-year-old Florida man died after two next-door dogs ripped off one of his arms, nearly detached his other arm and severely disfigured his face, police said. Read more here.

A 4-year-old boy died after being bitten in the throat by one of his father’s dogs, New York City police said. Read more here.

A pet Rottweiler forced its way into a Houston home and killed its owners’ baby daughter. The attack occurred while Alva Vaughn was washing another of her nine dogs in the bathroom. The 3 months old baby, was in a swing in the living room. When Vaughn heard a dog barking, she found the child on the floor with her head and hands mangled. Read the full story here.

Folks need to bear in mind that certain breeds of dogs are dangerous and no amount of love and attention can fix the wild nature. Most if not all people would consider a lion or a tiger impossible to tame and those big cats are too dangerous to be a pet in a neighborhood. Likewise some dog breeds are just bred for their viciousness and attacking qualities. These dogs are too dangerous to be pets.

Read more about dog bites here from the CDC.